This 6.5 meters long data-driven mural features neuroscientific research at multiple scales, from mathematical analysis of whole brain activity down to cortical activity of millions of cells. This was commissionned for the launch of Ebrains.eu, an European infrastructure project that supports neuroscientific research. The mural artworks I produced were initially presented to the public and to government representatives at the German National Parliament, Berlin.

In this illustration, I reveal multimodal data of The Virtual Brain with functional pathways in the human brain alongside a view over a ridge of the temporal lobe with millions of human neurons. This is the future of neuroscience that many neuroscientists and engineers are building. This fresco represents a woman on purpose with the hope that more of them will lead neuroscientific research. 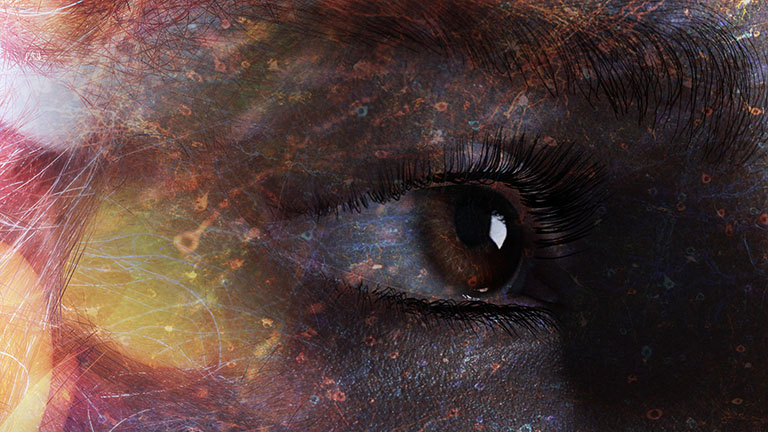 Reconstruction of the first large-scale digital circuit of human neurons in the temporal lobe. 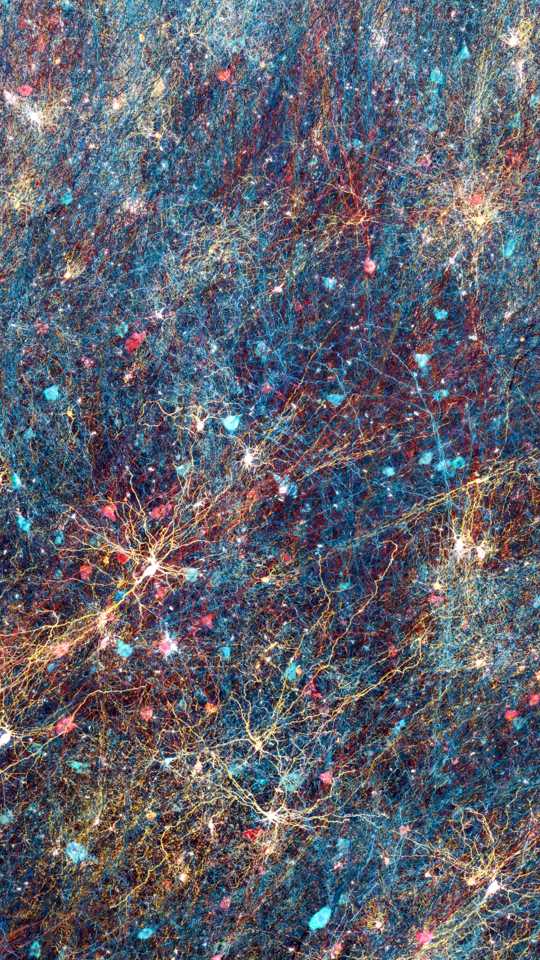 Here's a detail of the mural artwork at full size in a bright region. Spines are visible at this scale. A tiny fraction of the actual amount of synapses is represented here with 1% of spines per cell.

This mural artwork is the first digital reconstruction of human grey matter of the temporal lobe. White matter is hidden below this mountains of cells. Colors reveal structural properties of the circuit such as layers, cell morphology type and synaptic class. Full mural artwork size: 47000*27000px, 4m by 2.2m at 300dpi.

5% of neurons are visualised from a circuit of 50 million cells. The system looks so complex that we can hardly distinguish spines – at a very low density per cell here due to memory limit. Neither glia nor vasculature are in this model. Cell nuclei are visible but there are no other organelles here.

For this mural, I reviewed scientific literature, I curated data and I researched and developed two new tools. The first one is a curvature-dependent neuronal circuit builder that handles non trivial placement of neurons. The second one is a new 3D reconstruction tool made for Blender 2.8 that leverages my C++ mod of Blender/Cycles for large-scale visualization of splines, which I used for both murals visible here.

Paul-Löbe-Haus, Bundestag, Berlin where my artworks were presented. Picture by Ansgar Koreng.

About these scientific visualizations

Several mural artworks were commissionned by the Human Brain Project and were revealed at Bundestag German parliament, Paul-Löbe-Haus, Berlin on the 27th of November until December 19th, 2019. After that, the exhibition will move to the state parliament of Northrhine-Westfalia in Düsseldorf from January 21st to 31st.

For the production of the murals, I engineered software solutions with Python and C++ on top of Blender with my custom modification for large-scale graph visualization. This was deployed with Docker onto a Cray supercomputer at CSCS Lugano.

The images I produced were also used for Ebrains booth at FENS Virtual Forum from 11-15 July 2020. 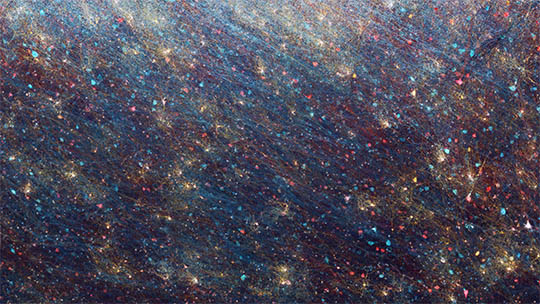 Another detail of the mural artwork at full size, this time in a dark region. Nuclei (within somata) and spines on branches are more visible in this case.

The following artworks are some of my contributions to Blue Brain Project / EPFL from 2014 to 2019.

Images below are copyrighted to Blue Brain Project/EPFL © 2015-2020. All rights reserved. 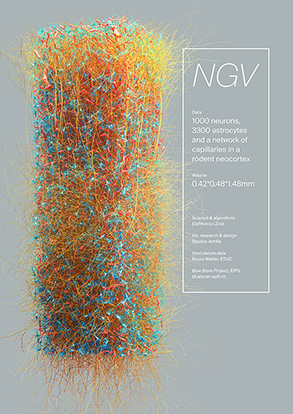 This visualization is part of the engineering research I did as part of a long term collaboration with scientist Eleftherios Zisis to reveal his research on the reconstruction of a digital circuit of neurons, astrocytes and blood vessels.

In the brain, neurons are supported and regulated by other types of cells known as the glia. Among the glia, astrocytes are territorial cells – shown here in blue – that, among other complex interactions with their surroundings, take nutrients from the blood vessels in red and distribute them to neurons in yellow. But astrocytes do more than that. For instance, they support a part of the synaptic activity within their domain. This visualization shows neocortical grey matter roughly 1.5mm tall and 0.5mm wide. Looking at digital simulations of neuronal activity, scientists found connectivity patterns: neurons seem to have a preference to connect with a chosen set of neurons and the resulting connectivity forms patterns like the "rich club" in the middle of this illustration or the feed-forward vertical pattern. The emergence of a communication pattern among cells reveals a functional structure within what appears to us as a chaotic forest of cells.

This artwork illustrates data obtained with electron microscopes of a small brain tissue.

A variety of cells are visible here, from microglia in blue/turquoise to neurons in purple, astrocytes in orange-yellow with a perivascular process and also myelinated axons in dark blue and blood vessels, here not reconstructed as endothelial cells, which shows the limits of the reconstruction. 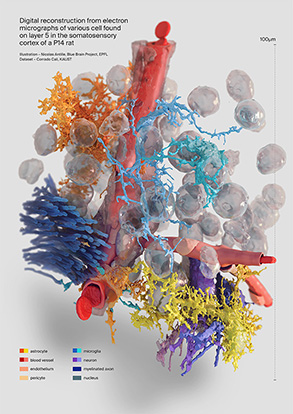 Inside the neocortical microcircuit

Scientific illustration selected by Cell journal to make the cover for a major BBP publication about the microcircuitry of the brain. I also contributed other figures to this publication. 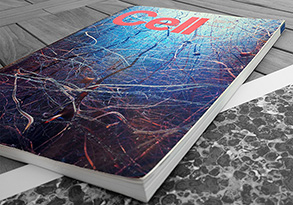 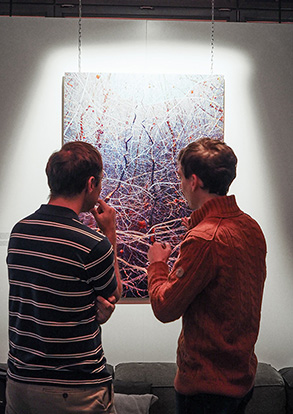 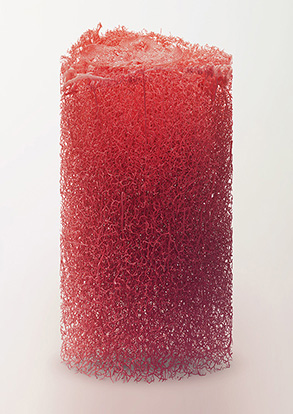 Digital 3D reconstruction of capillaries in the neocortex

Using field-based meshing – aka "metaballs" in Blender, I developed a way to automatically reconstruct 3D surfaces for large datasets. This method builds the mesh by blocks so it can build any dataset.

The graph skeleton was calculated by E. Zisis and the raw data was provided by Bruno Weber et al. ETHZ. 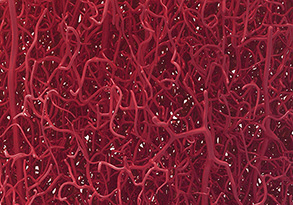 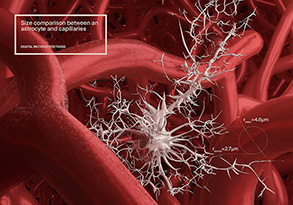 Particle simulation for an astrocyte

On top of automatically creating the 3D models for this illustration, I proposed a way to illustrate perivascular end feet – the parts that wrap around red tubes – with particle simulations that extend and flow over the capillaries.

This shows how astrocytes interact structurally with blood vessels. The figure below illustrates in more details what happens at a molecular level. 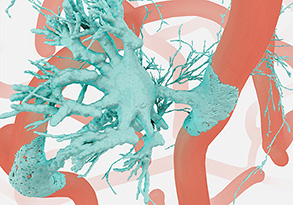 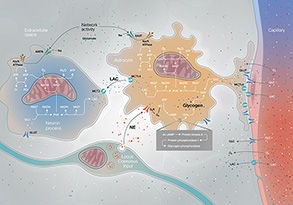 Energy supply between cells in the brain

Illustration about noradrenergic modulation of energy supply in the neuro-glial-vascular ensemble or in less barbarious terms, how molecules flow and interact between blood vessels, astrocytes and neurons. 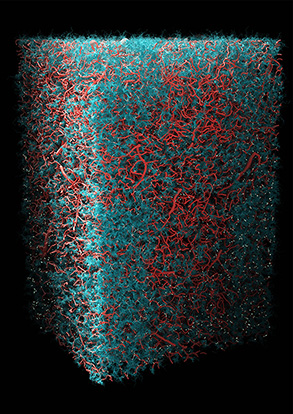 A major step after reconstructing vasculature is to have synthesized astrocytes filling a good part of the volume occupied by blood vessels and neurons. Here neurons are not shown. The astrocytes in blue grow special branches in white that are about to wrap nearby capillaries in red to get nutrients and distribute them to neurons, among many other roles theses cells perform.

This is the first illustration that could benefit from a mesh-less concept based on Cycles raytracer, enabling large-scale visualisation in Blender. 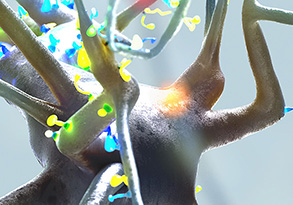 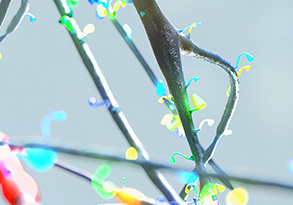 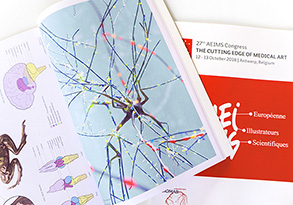 Synaptome of a layer 5 pyramidal neuron

A close-up view of the 4138 local connections – input spines and output boutons – that this neuron forms with other cells (invisible here) in a neocortical circuit. Given points on the surface of the branches and end points, I developed a way to represent spines in a realistic way, based on scientific papers documenting neuron spine types and sizes.

The dynamics of the "tree of thought"

Illustration of algebraic topology applied to neuronal simulations at a given state. This is an artistic interpretation of the activity of the human brain from a connectivity standpoint. 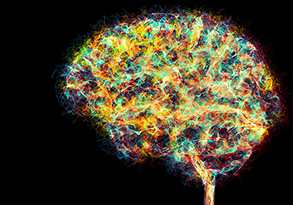 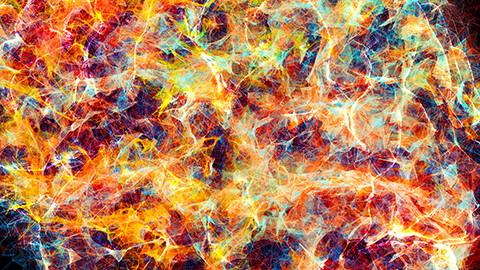 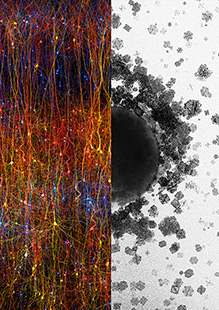 Illustration concept of algebraic topology coupled with neuronal simulation. Using simulation data on the left hand, I revealed the other "multidimensional side" in an orthogonal projection. Black and white here is a visual code I chose for domains that are beyond our sight. When many neurons are connected together at a given time, they form simplices of high dimensional orders and even "cavities", such as the one illustrated here.

This publication generated a small buzz in the scientific community with over 90’000 views in two weeks and a lot of questions asked to BBP. 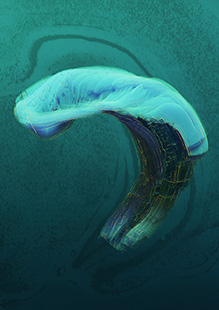 From a biological reference

Volumetric data of all sub-regions within the rat hippocampus, with a Nissl staining from an image stack that was the basis for calculating these volumes. 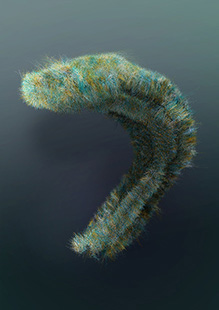 To a digital circuit of neurons

A digital circuit of the hippocampus CA1, a collaboration with engineer Cyrille Favreau using the open-source visualiser "Brayns".

Distribution of neurons cores in thalami (yellow-orange regions) and hippocampi (blue regions) in the rat brain. 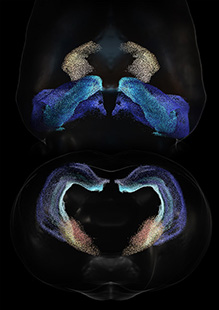 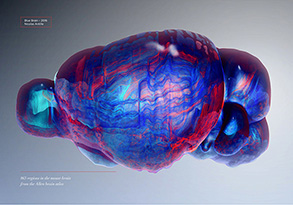 The delicate structure of the mouse brain

Complex datasets are often filtered by sampling/reducing the amount of visible elements. Here I tried to reveal all brain regions at once, with a work on transparency.

Using 3D surface reconstructions of all regions of the mouse brain, this was an attempt to reveal this intricate organ that measures a mere 1.3cm in length. 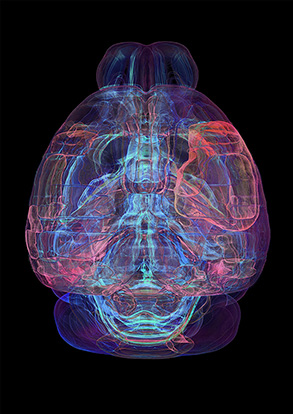 A frontal view of a thousand neurons in a circuit. They are coloured according to their position within the six layers of the neocortex with an approximate height of 2.2 millimetres. 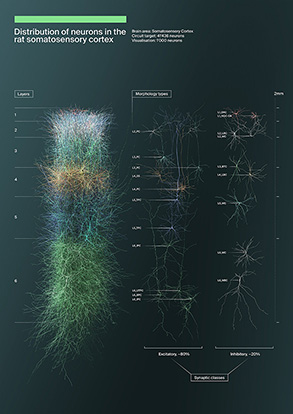 A grant for neuroplasticity

Synapses evolve over time. While connections are formed and strengthened, others dissolve.

This illustration was requested to show research on neuroplasticity which got a grant of 100M core hours offered by ALCF (Argonne, USA) to Blue Brain in order to run simulations to study plasticity in the neocortex. 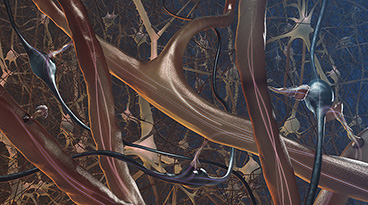 This is one of the largest simulations of the neocortex that BBP produced in mid 2017. The simulation is 87 Terrabyte large for a mere 217’000 neurons. A collaboration with engineer Cyrille Favreau. 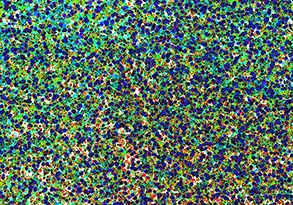 Optomechanics illustrations below done for the Laboratory of Photonics and Quantum Measurements, EPFL.

Cover of The Analytical Scientist 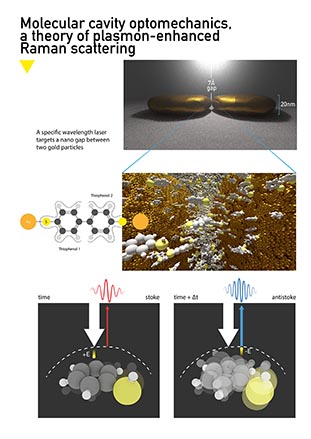 Illustration of the tiophenol reaction to specific wavelength laser within the 7Å gap between gold particles.

Nano particles of gold are positioned to make a nano gap of about 7Å. When this gap is lit with a precise wavelength, tiophenol molecules react, "store" photons and scatter them soon after [Raman scattering]. Philippe Roelli et al described the inner workings of this phenomenon which resulted in a lot of attention in the scientific community and this will pave the way for new quantum technology.

About these scientific illustrations

I strive to make meaningful and aesthetic visualizations for each and every project, in close collaboration with scientists. As an engineer, I read scientific papers, analyze data and I do research and development to create algorithms and tools – often based on open source ones – that process data produced by the hard work of scientists. As an artist, I use such tools to reveal scientific research with novel and insightful visualizations.